I usually do not comment on a family “vacation” but I think I will this time because it has a very interesting side note for all of us. Every year, my family “group”

We observed nesting pairs of bald eagles on the way to the museum. Awesome!!

gets together during the months of February in winter and June/July for the summer. These get-togethers are to discuss strategy, current events around the world, go over our preparations and, many times, construct a cabin, road, LP/OP or some other needed improvement to our refuge. We have traditionally met in February because so many members of my family, including myself, have a birthday during the month. This year my mother turned 90 years old and when asked what she wanted to do for her birthday her response was to go to the World War II National Museum in New Orleans Louisiana

As I have mentioned in other articles my father was a WWII veteran and my mother’s brother died in Europe while serving as a co-pilot on a B-17. Also, some of our family members, being from south Louisiana and being native French speakers, helped organize resistance movements in France and Belgium. Von’s father served in the Pacific. One cousin survived the Bataan Death March, so all of this makes it important, not only to my mother, but to the whole family. This experience was in our blood.

The museum is still under construction and many displays are not finished but as a whole it is very nice and gives a lot of 50 year olds and younger a good historical perspective on the tragedy called World War II. The amazing part of the experience were the grains of truth that we found sprinkled throughout the museum.

The first grain of truth that caught my eye was: World War II was precipitated by FDR signing an order to boycott fuel shipments to Japan and also freeze their financial assets in America. WOW! Did you get that? The same thing that caused a war with Japan during the 1940’s is the same thing we have done to Iraq (1990), Libya (2011) and Iran (2012) just to mention a few of the more recent examples of this action.

The next little morsel that caught the eyes of my wife, Von and my sister Gale was: Japanese internment camps! This display told what the

Japanese-Americans being relocated for their “own protection”

Japanese were allowed to take to the internment camps, how it had to be packed and that the assets of the Japanese were forfeited. Imagine that, the United States Government seizing the assets of Americans and placing them into “camps” for their protection. Does this sound familiar? FEMA camps are being opened, staffed and equipped today. For whom? You supply your own answer to this one. 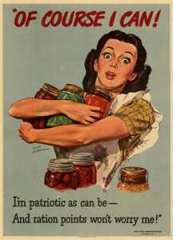 The next grain of truth we spotted was the need for deficit spending in order to assure VICTORY! Then it spoke of rationing and shortages of basic goods and supplies. Our 1.3 trillion dollar deficit for the last 3 years will be dwarfed by 2013’s 3.8 trillion dollar deficit budget announced by the Obama administration in just the last two weeks. The military budget is the sacred cow of the budget because we cannot be “perceived as soft on terrorism.”

Now, as my sister correctly pointed out, when we first entered the museum and it showed the forces of the AXIS powers and those of the ALLIED powers, we were greatly outnumbered. I think you can see this as a ray of hope. Just like George Washington and his men, fighting against the strongest military force in the 18th century, they were vastly outnumbered and poorly equipped but in the end they perservered. So too, we can perservere and triumph if we are prepared; prepared mentally, physically, spiritually and economically.

Next, there were numerous posters talking about what we now call 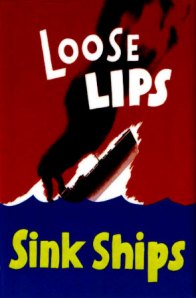 operations security or OPSEC. The problem nowadays is that the role is reversed from that of World War II. Today, Homeland Security and Janet Napolitano tells us that if we “see something say something.” Do you realize what this means? This alone means that ordinary American citizens have been turned into the enemy. Instead of keeping your “Lips zipped” you are supposed to rat out your neighbors if you think there is anything suspicious. I have called the FBI, the Texas Department of Public Safety Drug Enforcement Unit, the county sheriff and numerous others to report daily, almost hourly drug deals taking place within sight of my house. So far nothing has been done. So, why should we call if we see some suspicious activity? Because the government is not looking for people selling drugs. They are looking for people who are buying guns and ammunition, stocking up on food, buying gold and silver in case of a financial collapse and believe that the Federal Reserve needs to be abolished. There is a whole host of topics the government is monitoring but it has nothing to do with keeping you and yours safe.

The next grain of truth that hit all of us right between the eyes was the fact that America was in the grips of a catastrophic depression.One of many Hoovervilles during the Great Depression.Regardless of what the pundits say, America is currently in the grips of the GREATEST DEPRESSION. It was easy to see that the cure for the Great Depression was WAR. The suffering of Americans in the 1930’s was often contrasted with the excesses of the late forties, fifties and early sixties. So how does this phenomenon differ with what happened in America during the 1930’s? It doesn’t differ at all.

One of many Hoovervilles during the Great Depression

Contrast the photo on the right with the photo below. The explosion in unemployment, underemployment and the lack of social services in some cities has driven middle income Americans to live on just pennies a day, not unlike the people protesting in Tunisia, Libya, Egypt, Syria and other countries living on less than $2.00/day. All I can say is, “War is never the answer for the poor.” To view the current state of the economy in America watch this BBC special: http://www.youtube.com/watch?feature=player_embedded&v=suJCvkazrTc 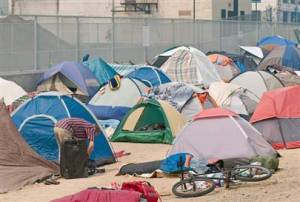 One of the many Obamavilles in America today!

Overall the air of the museum was quiet and respectful, similar to that of a library. There is a restaurant inside the museum and after a time we sat

down and had a nice meal. While we were waiting for the food to be served we began discussing the similarities between pre-WWII and today. We also talked, I should add rather enthusiastically, about how America was getting ready for another world war and this time instead of Japanese-Americans or any other ethnic group going to “internment” camps it would be “dissidents”, terrorists, war protestors or anti-government types, especially those wanting to end the Fed.

I guess overall we were lucky that some of the people nearby didn’t “see something and say something” because we were getting strange looks from neighboring tables and even one couple sitting next to us hurriedly paid and left, looking back over their shoulders at us while leaving the restaurant.

Was this all that we noticed? NO! The similarities between the buildup to World War II and the build up to World War III are striking. One of the topics that struck us all as very relevant to our times was the short film about the JUNGEN or Hitler Youth. (There are numerous short films, usually 6 or 7 minutes each, throughout the museum.) It seemed to perfectly parallel Obama’s call for a “civilian” youth corp as large as the United States military

even while he was still campaigning for president. (This was documented very well in the movie Obama Deception.) Notice in the screenshot that the Obama youth have camo fatigue pants and matching shirts as their “uniform”.

No, there were numerous parallels and many were actually eye opening to those around us as we commented about them, in a louder than necessary voice. We did see heads nod as we spoke and many turn in disgust. But the BIG SHOW is in the 4-D theatre. It is a film presentation put together by Tom Hanks and Steven Spielberg. It runs roughly 48 minutes and is a good show. **WARNING: To all those who suffer from PTSD. There is simulated gunfire, smoke, numerous objects that drop from the ceiling and rise up from the stage itself. It is very realistic so be prepared mentally when you go into this theater.**

I’ll leave you with one final thought. During WWII my dad drove the largest truck that had ever been built up to that time. It was used to haul the massive 155mm mobile batteries from one point to another. Toward the end dad had to go back and forth getting fuel for Patton’s tanks, load the dead bodies of American G.I.’s from the snow covered battle ground, known as the Battle of the Bulge, onto the trailer and later when the concentration camps were liberated he carried thousands of dead bodies that had not been incinerated to a communal trench for burial. He told me many times about the walking skeletons that were set free from the camps, the piles of bones that had not been crushed (for fertilizer) and the other horrors they encountered in Germany in 1944-45. DON’T LET THAT HAPPEN TO YOUR FAMILY! GET PREPARED NOW!!!

Note: To those of you who wrote emails and comments to me while I was gone, please be patient I will try to answer everyone. Good luck and God bless you and yours.