I know what you are thinking, “What is the difference?” In two words, a plan. Why is this important? Let me explain. I do not want to insult anyone’s intelligence but I do want to cover some basic concepts that you or others may have missed or forgotten.

A real refuge for refugees.

A refugee is someone, for whatever reason, who has to leave their home and seek refuge, read safety, somewhere else. A refuge is a haven, a safe place where a person can continue to live, hopefully in relative safety. (Notice how the word safety reappears in conjunction with the word refugee?)

Home for evacuees during Katrina. Got it?

somewhere else by some political or military authority to continue to exist. This existence may be in relative safety and then again it may not. But notice one thing, the evacuee is compelled to leave by some authority and is at the mercy of this authority for their continued existence.

The examples are numerous. The German Jews who fled Nazi 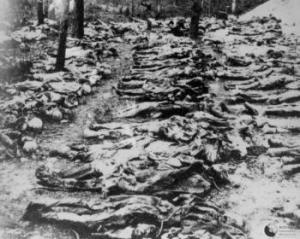 Is the government really here to help you?

Germany for Switzerland, Sweden, Norway, England and the United States prior to 1940 continued to live and even prosper both during and after World War II. Those that were compelled to leave their homes, belongings and even families and sent to a central location, i.e. concentration camps, suffered a horrible fate. In my opinion it was a fate worse than a quick death brought about by trying to fight for freedom.

For the most part, the refugee is still in control of his life. It is true he/she had to flee but the destination is still the prerogative of the one leaving. The evacuee has no choice in the matter. 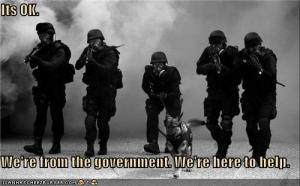 either knocks or kicks it in and takes you to a central location, then don’t read any further. If on the other hand you would like to preserve your health, wealth and that of your family, please read further.

First, you must decide what you are running from. Is it a natural disaster? Tornado? Hurricane? Earthquake? Then you must pick a destination that will be safe from these events. Sounds easy, even basic, right? Remember all the Katrina evacuees that were taken from New Orleans, Louisiana and were taken to Houston, Texas by an all knowing government, only to be evacuated from Houston because of Hurricane Rita. So, maybe leaving one hurricane prone area for another is NOT a good plan.

Chances are, that if you are reading this article you are fully aware of what is about to happen to America because of its out of control debt, crony capitalism, corrupt officials and the Federal Reserve. Chances are that you have a pretty good idea of what you think is going to happen as a result. We are in the midst of the Second Great Depression. Remember, it is a recession when your neighbor loses his job but it is a depression when you lose your job. Knowing this, you must, and I mean absolutely must, plan your escape route and destination NOW!! 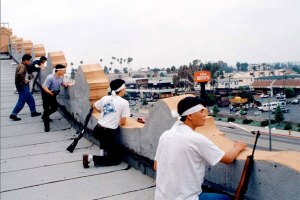 Remember the Rodney King riots in LA in 1992? When the Crunch comes it will be much worse.

Some of you live in large metropolitan areas. Let me ask you a question. Do you feel safe walking the streets of your city at night? Not just your neighborhood but all the streets of your city at night? No? Then you will not be able to stay there once the “bread and circuses” come to an end. What are bread and circuses? Welfare payments, SSI, Social Security, veterans benefits, Medicaid, Medicare, food stamps and plethora of other government benefits to keep the populace under control. I often wait until after midnight to walk for exercise in order to escape the heat of the day of summer in my area. Who do I see? More people doing the same. I have walked the city streets of large towns and small cities for exercise at night and some of them are very nice. Others are nothing short of war zones. If you live in the latter rather than the former you must relocate in times of complete financial collapse.

Where? How? When? Let’s address the last first. When, is now. You

Here is a reason to consider a small town. This is big news.

can wait no longer. You need to have a “refuge” for you and your family and/or friends to relocate to in tough economic times. I live in a small town in southeast Texas (pop. 750). As I said I can walk the streets at night with little fear other than tripping over a bad spot in the road. But, my refuge is 17 miles from any town (pop. 250) in western New Mexico at 7,500’ altitude. The when is now. You must make preparations now.

That brings us to how. This is a multifaceted concept. Let’s take one at a time. How do I buy a piece of property in X county in the state of X with my limited budget? There are several methods. To cover them all would take an entire article by itself. Here are two tried and true methods. Locate an area where you want to settle, travel there and talk to real estate people and buy an appropriate piece of property. I have done this several times in the desert southwestern states.

The best method is so easy it is almost criminal. Decide where you want to live and either travel there, which I suggest most hardily, or call/write the tax assessors, tax collectors or other officials in that area you choose and bid on property taken for taxes.Why are properties taken for taxes? The number one reason is that the owners have passed away without heirs or the heirs were not interested in the property for one reason or another and failed to inquire at the local tax office if taxes were due. The county/parish, municipality or other governmental unit sells the property, usually for the taxes owed.

Here is a personal example. I once purchased a 50’ by 100’ city lot for $10.00. I looked up the former owner on the internet and asked them for a quit claim deed and paid them $10.00 for shipping and the total bill: $20.00. Will I ever live there? No, but if everything goes back to “normal” I may build a rental home there. It really is that easy. I know of people who have purchased entire city blocks of abandoned property for as little as $50.00 per lot. Some states, such as Nebraska and Minnesota have reinstituted homesteading programs where land is either free or nearly free. To good to be true? No. There are restrictions and you must go to the states’ websites to find out what they are.And before you ask, there is no federal government property available for homesteading. Do not fall for the tricks in the back of magazines or periodicals that declare to the contrary.

This brings us to the most difficult part, where? Where should be as much a personal choice as it is a practical one. As most of you know, once you cross the Mississippi River the population density begins to drop dramatically until you reach the California border. In a survival

This beats a tent any day.

situation, the fewer the people the better. Are there good places in the east? Yes, New Hampshire, Vermont, Maine, areas of Pennsylvania, Maryland, West Virginia, upstate New York and others. It is your duty and responsibility to research this based upon your prejudices, likes and dislikes. For me, I chose the R.M.E. (Rocky Mountain Empire) states. Why? Because I like the solitude and the views.This sounds silly I know, but I built, yes I personally build all my own. houses saving tens if not hundreds of thousands of dollars in the process, around the trees in my area rather than cutting them down. This provides habitat for the wildlife and beautiful views. Bears routinely walk around my house on the porch. Hummingbirds are so tame that I hold out my hand and let them feed from the feeders while perched on my fingers. Mule deer and elk often stop underneath my home in New Mexico (built on stilts) and shade underneath the house during the hot part of the day.

How did I find this luxury paradise? I read an obscure paper after having purchased two very low cost 40 acre tracts in Arizona. My curiosity piqued, I traveled to New Mexico and found the piece of property I had always dreamed of. I paid the princely sum of $2,000/acre for my dream. I built my own road and my own house. ((Hey, if I can do all this at the age of 50 (then) and older so can you.)) The best part of it was that I sold the two tracts in Arizona for more than I paid for them two months earlier.

Here is a simple fact of life. Land in the western states is hard to come by. When you do, buy it, if it meets your criteria. In Arizona the governments, local, state, federal and tribal, own 85% of all land in the state. That leaves 15% for everyone else. Even in that 15% there are some real bargains. You just have to look and do your own research

I know what you are thinking, the desert southwest! You’ll die of thirst. There is just cactus there. My response, you watch too much TV. My well is 141’ deep, cold and sweet. There are numerous wells around between 95’ and 400’. The deeper wells have water but it is almost undrinkable. Find a reputable water well driller. Ask around the area you plan to settle and find the people who are satisfied with their wells and the drillers. This should be part of you early reconnaissance.

I have incorporated into this article: https://codgerville.wordpress.com/2011/12/14/achieving-true-independence-part-i/

almost everything you need to survive. There are many excellent survival books on the market and I do not try to replicate their information but rather add my own experiences and perspective onto their already excellent texts. Research for yourself. Take it to heart and apply it.

May God richly bless each and every one. Keep packing and keep stacking.

15 thoughts on “Strategies For Survival: Are You Going To Be A Refugee Or Evacuee?”